Artist Christopher Samuel has been supported by Attenborough Arts Centre and has exhibited his latest show, Cripple (2019), in our balcony gallery. Following on from this, Chris was asked to exhibit at VAE Raleigh, a gallery in North Carolina, USA. The following is Chris’s journal he wrote during his time in America.

The journey was smooth as can be and my wheelchair made it too without being damaged. Which is always a plus. Planning every detail and double check everything was well worth it. Anyone who uses a wheelchair and electric one will know how worrying that is. It’s not as easy just to say, oh my luggage was lost or I’ll have it sent to the hotel where you’re staying and you receive it the other end and it’s damaged and broken. Both of which I’ve had experience with. That wasn’t the case.

It was nice to be greeted by housing crisis body of work as we entered VAE gallery. Housing crisis is the first work you will see as part of The Full Light Of Day exhibition as you enter. The exhibition was curated with real thought. All of the artist had a real story to convey. Which I could identify with to a degree. This was refreshing to see. I thought before hand in a slightly skewed perception that maybe the barriers and experiences other disabled people face in the US would differ

The whole VAE Raleigh team were really welcoming and hospitable, at the same time very professional.

Work stood out to me because I thought her piece was quite humorous in its appearance similar to my Welcome Inn body of work, because what she did with this piece. she in a sense broke it to highlight how an object wasn’t designed for her because of her disability. The way she translated it was to give everybody the experience of an object being non-functional, which I thought was funny and clever. This immediately struck a chord with my own practice and the fact that I had focussed on accessibility and making the work accessible to everybody in terms of people relating to it and participatory engagement with my work. Like the hotel room it was designed with a slight theatrical and humorous approach, the objects were in a sense broken and designed in a way to raise awareness about systemic discrimination.

Part of guided tours, speaking to members of the public about my work

I thought they were brilliant because they had audio describers with them, part of an organisation that specialises in live audio descriptions, which allows participants to really engage with myself and the audio describer. This level of accessibility I thought was brilliant to see in action. In regards to the tour itself and the different groups this was one of the highlights of my trip to Raleigh as I was directly engaging with people who had various different impairments and for me I wanted to get an understanding of their experience and how they experienced disability in relation to the laws and different barriers they face. Also I was interested to see if they could identify and relate to housing crisis because the laws and rights of disabled people change between countries.

Where I was let down by the state, they could identify as they are not entitled to that level of support by default, therefore it relies on personal income. They spoke about being pushed out of society and having to live in a care home. One lady spoke about her guilt over having enough money to secure housing, having passed through different waiting lists, which people can be on for years – where her friends were in a position without access to healthcare or housing. I felt how lucky I was to have healthcare and that the government will pay for a wheelchair for me to use, and a minimal amount of support for carers, enabling me to wash, get dressed – whereas these people don’t have access to that and are somewhat trapped in care homes, not being able to function and be seen in society.

Speaking with members of government who spoke of constantly fighting to get people access to different services, but being unable to due to lack of insurance.

The Last Friday event was brilliant. I was there during the day giving guided tours, and during that time there was a steady amount of people coming in and out of the gallery. By 5pm the stream was constant and I was slightly taken back by the amount of people that came to see the show, it was over 1500 people. It was brilliant to see people engaging with my work and talking about it as I listened in to the conversations. Along with people approaching me and speaking to me, and telling me how relevant and important the work is.

Experience of being there focus on access issues – accessible pathways, shops, places to eat

Unable to get a taxi

Most places were accessible, people were welcoming, open and helpful. The only drawback that stood out was the ability to get a taxi which was near enough impossible. Which meant that I was restricted to as far as my wheelchair could take me. would have been nice to rent a vehicle to explore the area.

Personally I would love to live in America but I’m in no position to have enough money to pay for my healthcare.

Preparing for the talk

As I haven’t given many talks

Nervous leading up to talk

The conversation led by director of VAE Raleigh and Sam

I noticed from talking to members of public and engaging with people that even though the laws differ, in terms of rights and politics there’s a correlation between how unbalanced things were in relation to access to housing, healthcare and their ability to live a normal functioning life as a disabled person. This is all down to money –  economically being positioned, state support* access to support through insurance, housing requires deposit that most people don’t have support for, so most people end up in sheltered or care home facilities.

Casual conversation, went through my relationship with Attenborough how they supported me whilst still at university

Working in gallery as an assistant, continuing to develop with Sam to develop housing crisis which opened up at the Attenborough as my first solo show.

My practice has continued to develop into latest body of work, titled Welcome Inn in Blackpool which has been successful and covered nationally and internationally.

Sam spoke about Attenborough and VAE correlation in terms of mission, pushing disability politics to the forefront and giving agency

Keep producing the work that I’m interested in because I think that disability politics people can relate to it around the world regardless of class, race, gender

Highlighted that I’m on the right path, creating relevant work, and can be more ambitious creatively, in engaging with these ideas and

As a result of this trip new opportunities to work with VAE Raleigh in the future and other galleries in Raleigh. 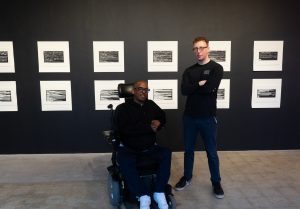 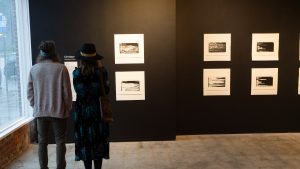 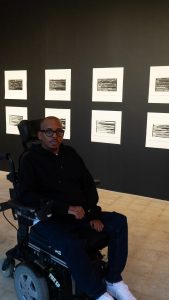 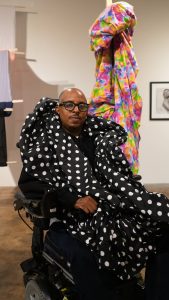 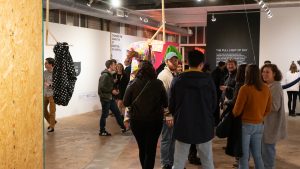 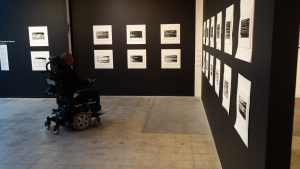 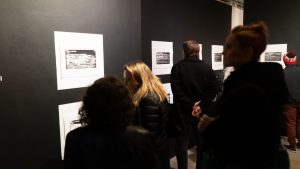 Newer Leicester Comedy Festival 2020 a roaring success
Back to list