At the Attenborough Arts Centre, we were thrilled to support the Leicester Symphony Orchestra’s return to the stage as it celebrates its 100th season of music alongside the University of Leicester.

After nearly 18 months of lockdown restrictions, the Leicester Symphony Orchestra returned to De Montfort Hall alongside the Leicester Philharmonic Choir and the Leicester Cathedral Children’s Choir, to perform Carl Orff’s ‘Carmina Burana’ on the 23rd October.

Within our centre, we held a private reception ahead of the performance hosted by our patron Michael Attenborough CBE, son of Richard and nephew of David, and the University of Leicester’s President and Vice-Chancellor, Professor Nishan Canagaraiah, with VIP’s including the Lord Mayor, Councillor Deepak Bajaj.

The reception included drinks and canapés, gallery tours from Jeremy Webster, our Deputy Director, and Rachel Graves, our Visual Arts Officer, as well as a talk from our Learning and Outreach officer, Marianne Pape, about our education department.

Within our Diana Princess of Wales Hall incredible speeches were given, heralding the event to come by Michael Attenborough, our Director Michaela Butter MBE, the chair of the LSO Jenny Hand, and Professor Canagaraiah.

“The Leicester Symphony Orchestra is a cultural pillar of our city, and so it is only right that we champion their return to performances after almost 18 months away” said Professor Canagaraiah, “I have no doubt their rendition of Carmina Burana is set to be a spectacular celebration.”

Michael Attenborough mirrored the sentiments given, stating that “access to the arts is a fundamental right” whether it be visual or musical. 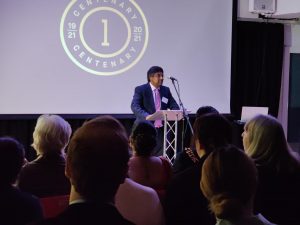 The Leicester Symphony Orchestra itself has a rich history as founder, Sir Malcolm Sargent,was one of the most famous classical musicians of the 20th century,  and close friends with late actor, theatre director, and our founder Richard Attenborough. Sargent was appointed head of the music department in 1921 at the newly-formed University College Leicester, which would later become the University of Leicester, and it was from here that the LSO was founded.

Jenny Hand, chair of the LSO and cellist, said “We are absolutely delighted to be back playing again and very much look forward to a live audience. We are thrilled that we have been able to work with the University of Leicester on this concert which launches both our centenaries.”

The event was a rousing success that marked a very special milestone for both the Leicester Symphony Orchestra and the University of Leicester, that we were proud to be a part of.

Newer Our Craft & Art Fair Returns Better than Ever
Back to list
Older Celebrate the Festival of Light: Diwali in Leicester