School children from Leicester and Leicestershire have found out exactly what it means to travel into space by having their questions answered by UK astronaut Tim Peake.

Major Peake spent six months on the International Space Station (ISS) from December 2015 and became just the second person to wear the UK patch on his space suit when he embarked on a ‘spacewalk’ in January 2016.

Now, young students aged between 5 years old and 18 from three special schools – Ellesmere College and Nether Hall School in the city, and Ashmount School in Loughborough – have had their burning questions answered by the UK Space Agency and European Space Agency (ESA) astronaut thanks to a programme developed by the University of Leicester’s Attenborough Arts Centre and Space Park Leicester.

Their questions ranged from “How do you prepare for floating in space?” to Major Peake’s favourite memory of the ISS, which involved clinging on to the outside of the space craft and looking down at planet Earth as he orbited the planet at more than 17,000mph.

The former British Army Air Corps officer also answered pressing questions on an astronaut’s diet, sleep patterns and – most importantly – how to use the toilet in space.

School children had the chance to submit their questions through the ‘Little Inventors in Space’ programme, led by the Attenborough Arts Centre in partnership with Little Inventors and Inspirate. 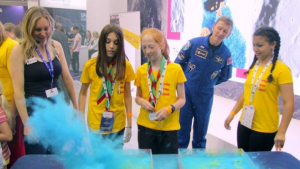 Children are also encouraged to take part in the Little Inventors in Space Challenge, with submissions open for ideas to help astronauts sleep, have fun, stay active, and feel happy. Entries are open to students at the three pilot schools – with the intention to roll the scheme out further – and a handful of ideas will be selected to be brought to life.

The project is one of a number of outreach programmes provided by the Attenborough Arts Centre, which include the Paul Hamlyn-funded SENsory Atelier, an Inclusive Youth Arts programme supported by BBC Children in Need, and numerous other projects to support schools, families and students of the University.

Michaela Butter is Director of Attenborough Arts Centre and said: “We are really grateful to Major Peake, the UK Space Agency, and our partners Little Inventors and Inspirate for their support in seeing this project get off the ground.

“As a proud part of the Leicester community it has been a privilege to play a role in bringing children closer to space, especially in the year which will see the University’s Space Park Leicester development open its doors.

“It’s clear to see the passion for space and learning that has been driven by this project.”

As part of the University of Leicester’s commitment to outreach and supporting schools and colleges, a Life on the ISS workshop with accompanying digital resources for KS2 and KS3 have been created for use by teachers.

The University’s outreach team support a number of schools with providing careers information. If you or someone you know is interested in studying a STEM-related degree programme, you can hear from students and experts via our on-demand service.