We are sadden to hear of the passing of Professor Sir Robert ‘Bob’ Burgess, the longest-serving former Vice-Chancellor of the University of Leicester and former Chair of Attenborough Arts Centre Board. We offer his family and friends our condolences as we remember his inspiring life and legacy.

Born 23rd April 1947 in Sturminster, Dorset, Bob Burgess attended King Arthur’s School in Wincanton from 1958, followed by a teaching role at Bennett Memorial Diocesan School in Tunbridge Wells. After a time he received his BA in 1971 from the University of Durham and his PhD in 1981 from the University of Warwick, meeting and marrying his wife a fellow sociologist, Hilary Joyce, in 1974. Following his PhD, Bob stayed at the University of Warwick as a sociology lecturer, which led to his appointment as Professor in 1987 and Senior Pro-Vice Chancellor in 1995. Within this time he also served as Director of the universities Centre for Educational Development, Appraisal and Research (CEDAR).

His career at the University of Leicester began in 1999 where he was appointed as the Vice-Chancellor, where he presided over significant successes that were visibly shown in the national league tables for universities and the winning of the ‘University of the Year’ at the 2008 Times Higher Education Awards.

While Vice-Chancellor, bob oversaw the building of the David Wilson Library, the Henry Wellcome Building, the initial redevelopment of the Percy Gee Building, College Court, the George Davies Centre, the purchase of The Coppice, the redevelopment of the Villiers Hall to become John Foster Hall, the extensive refurbishment of Gilbert Murray Hall, as well as greatly improving the Universities sports facilities.

Bob Burgess was a passionate advocate for the arts and became Chair of the AAC advisory board when Lord Attenborough became ill. He remained an enthusiastic and supportive Chair until his retirement from the University in 2014.

Our Director, Michaela Butter, remembers him with fondness and gratitude for him appointing her to a permanent position on the staff

“I came to the University initially on a temporary contract as maternity cover for a year. During that year I pitched the idea about fundraising for an art gallery extension to the AAC. Bob was fully behind the idea, saying if I could raise the money the University would back the scheme. I think he might have been surprised when we achieved half our target within a few months but he actively helped us to secure the remaining funds, hosting events and introducing us to potential donors. He then agreed to my staying on to deliver the Capital scheme initially as part of a job share and then as sole Director.” 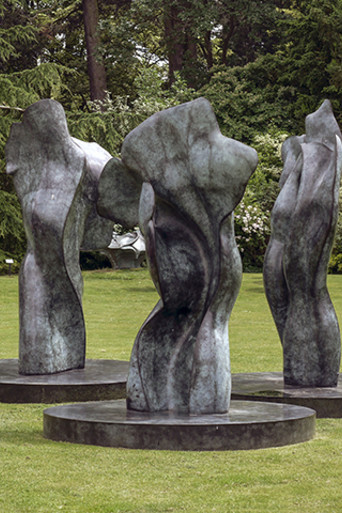 During this period Bob also negotiated a formal partnership with the nationally acclaimed Philharmonia Orchestra to provide high quality tuition to talented students engaged in music. He allocated resources to create the Philharmonia scholarship scheme which continues to this day, supporting 5 students every year to learn with Philharmonia musicians.

Bob initiated the very popular Sculpture in the Gardens exhibition inviting sculptors to select work to show in the Botanic Gardens every year. This was a very big and ambitious project, fully funded by the University, with some work acquired each year for the University collection and put on public display. During his time at the University he personally oversaw the purchase of many works of art to decorate University buildings believing in the power of contemporary art to add value to the working environment.

Bob’s legacy will be fondly remembered, as a man who showed great kindness and passion for those he led. You can read the University of Leicester’s tribute to Sir Bob Burgess online, where we are all invited to sign the online book of condolences.